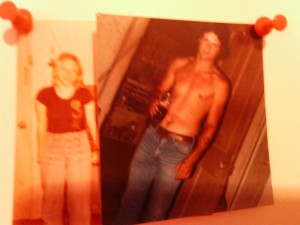 Today I was having a conversation with my husband about other people’s marital woes. we spoke on fidelity, trust, work ethics (both at the relationship as well as providing for the family). It got me to thinking about the vows people take as they enter into their relationship and what it really means to them.

The pictures above? Two young kids with no idea what those words meant at all. Both grew up in abusive households, both left home early and came together forming an”us against the world”kind of relationship. If you had told me that 38 years later, (36 married) that we would be better friends now than at 16,I would have laughed. Through ups and downs, laughter and tears, here we are. With a better understanding of what it means to stand beside one another no matter what storms come. The”through sickness and health”strained my sanity when he became ill and almost died. I would curse the dawn that I survived the night and then put one foot in front of the other doing what had to be done. And yet even now, he tries to make sure that my car is drivable, that there is enough money for gas to get me back and work, does laundry so I don’t have to, cooks as well. Emotional words don’t come easily for him.. He says that is my forte.. Words. His is actions.

I think too often people don’t give enough thought to their vows, it’s the”I don’t think that means what you think it does” kind of thing. And in truth, I can honestly say that I fell into that category myself. Maybe it’s age that helps me reflect on the true meaning. Maybe it’s the life experiences. Whatever it is. Is given me a new appreciation.